Years ago, if you talked about wanting to carry your phone with you on your runs, people would have looked at you like you were crazy… or paranoid… or insanely plugged in. Maybe some people still think that. But a lot of people want to run with their phones now and for good reason! (blogging, taking pictures, being on-call for family during 3 hour training runs, calling for a ride when injury strikes!) And we all want to do it without a ton of gear added on. I still see people carrying their phone on an arm band or a belt. But this is where Oiselle is seriously cornering the market. Oiselle makes run clothes that carry your smart phones in the clothes themselves and in a way that doesn’t affect your running! 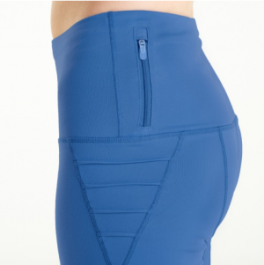 this wide cummerbund area/look is not as prominent in person; trust me these pants look good

I’m not sponsored by Oiselle or getting anything from them (except great run clothes… which I pay full price for) but I did sign up to be on the “Oiselle Team.” It’s basically a fan club. You can check out the story here. I’ve mentioned it several times here before but the reason I like Oiselle so much is that they are a store just for RUNNERS, and even more specifically female runners. What other company or brand can say that? Sure, I have run in other brands before but they were never made specifically for distance running and there were always issuesthat kept them from being great.

Oiselle makes several shorts, capris, and tights that can hold iPhone (for simplicity I’m just saying iPhone but any iPhone-sized phone would fit here – and for the record I carry an iPhone 6 – the regular sized one). I’ve only run with a phone in the Aero Capris and the Long Roga Shorts. But Oiselle carries other tights and capris, like the KC Knickers in the spring collection, which also have a “iPhone 6 pocket” which I assume is referring to the regular iPhone 6. You can see in the pictures that the zipper line for the Aero Capris seems much larger but Oiselle says specifically the KC’s can hold the iPhone 6. I think the Portman Pants have the smaller zipper like the KC’s but are also said to be able to hold a phone too. Again, this is a new and improved feature because the previous KC’s and Portman’s did not fit the iPhone 6’s.

love the new patterns on the KC’s!

The KC’s are more traditional run tights synthetic fabric-feel. The Aero’s are more of a cloth-type feel, which was really surprising when I first got them but which I ended up loving. For starters they are very breathable which is great when I wear them for Florida races. Also, I think the more cotton-y/cloth-y material is what makes the fabric really stay in place during all the running. But I hope to try out the new KC’s too! They’re both great but it all depends on your preference.

I have run all my recent half marathons and marathons in the Aero Capris and they are not only amazing capris to run in but they also look amazing and they carry my phone and anything else I could think to carry during a marathon – which is surprisingly a lot of stuff. I think I mentioned in my Marine Corps Marathon post about all the things I shoved in the Aero pockets (iPhone, metro card, 2-3 gels, money…). The Aeros never move around or twist during runs and I never have to pull on them to sort them out.

these pants look even better in person and in race photos if you can believe it, cuz they look pretty great here already!

For all my other non-race runs down here in south Florida though, I wear the Long Roga Shorts. They are the only traditional run shorts from Oiselle that have the large right side pocket that can fit an iPhone. The regular Roga shorts only have a small back zipper, which looks like it might fit a key or something. 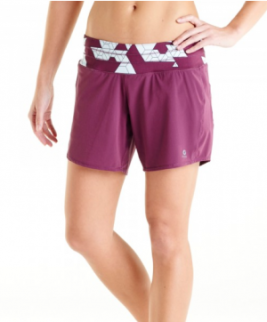 The Long Roga is very light weight and, like Oiselle says on their site, a great short option for people who like to run in capris but want to transition into shorts. These Long Rogas never ride up and I have never experienced chafing in them on any run, and I’ve used them for marathon training frequently. And when I throw in my iPhone on the right pocket of the Rogas, it never bothers me during the run. You’d think it would feel lopsided or it would bounce around but it doesn’t! And I’m telling you, normally not being balanced would drive me mad because I get all control-freak when it comes to run things. But the Roga-iPhone pocket never enters my radar of annoyance.

One thing you still have to do with the Aero or Roga pockets is protect your phone. And by that I mean from moisture and sweat. I found that Ziplock Snack Bags fit iPhones perfectly! And there isn’t leftover bulk from the bag that is going to bunch up in your pocket. I just throw my phone in one of these, turn my phone on airplane mode, and take off. Hey, I don’t want to totally be connected the whole time, or have the phone waves pressed against me for 4 hours during a marathon. But I do want my phone with me! And it’s super easy to grab the phone out of the Aero and Roga pockets, though probably easier with the Roga pockets if you’re right handed and since it’s towards your front (vs Aero in the back). 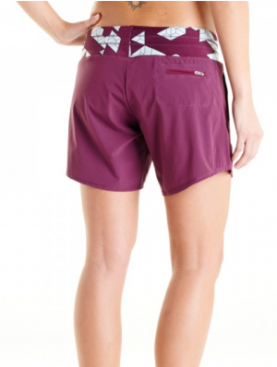 And for those of you who don’t think “long” and “shorts” go well together, these shorts really aren’t that long. Sure, sometimes I wouldn’t mind if my tan lines were higher, but honestly they aren’t super long. But I’m also 5’8″ so they sit shorter on me than they would someone 5 inches shorter than me. I do find that Oiselle makes clothing for the “average” female height which is around 5’3″-5’4″. This affects me most in their shirt lengths which don’t hang down as low as I’d prefer them to hang. But with their shorts, even their long shorts, they just feel like normal short length to me.

Lastly, the price…. Oiselle isn’t the cheapest of run clothes. I’m not sure how much you’re used to paying for shorts or run capris but I know I felt the air punched out of me when I saw the price of the Aero Capris ($78). And even the Long Roga Shorts are $52. But they also have pretty regular sales going on and I got 2 of my 3 Long Rogas on sale for $36. And I bought my Aero Capris during another sale last fall before marathon season. Some previous Oiselle sales have been 30% off all run bottoms, for instance.

If I wasn’t in grad school right now, I’d probably make all kinds of insane rationales why I needed the complete spring line from Oiselle, but since I’m just a poor college student with two kids, I have to pick and choose run gear pretty carefully. I think the Aero Capris are worth the $78 for a great pair of race capris that don’t hang weird or pull weird during races and that can carry an iPhone and more! And I think the $52 for the Long Rogas, like maybe 2-3 pairs to get you through the week in between washes, is worth it for quality run shorts that stay where they’re supposed to on long runs! If you’re unsure, try out the sales, but also remember that each season they tweak their older products and make some really great improvements. So for those extra $16 you might be getting the benefit of an improved design. Truth be told, I prefer the current Long Roga Short design to the (older?) sale design, so they must have done some good tweaks in there! But they both function the same in the end.

Do you run with your phone? Have you ever tried the Oiselle Aeros or Long Rogas? What did you think of the pockets?

8 responses to “Run Clothes That Hold Your iPhone! – Oiselle Running”