Cold. Colder. Coldest. This was the coldest race I’ve ever run. And it was in Miami! But as everyone knows, the whole country took a winter weather beating this weekend with Winter Storm Jonas and, even though we weren’t technically in that northern mix, it was still freezing cold down here in MIA. But I finished the race without injury and that is always a good race!

They changed the expo location this year from the convention center to a large building in the Art District of Miami. There was no parking garage and people either had to pay $10 to park in a lot or park on the street with a local parking app that you pay by phone. As you walk up to the expo you see 5 food trucks! I wanted to order something from each truck! They looked so good!

Then, right inside the front doors of the expo, there was a man sitting on this bike/truck thing, brewing up fresh coffee and cappuccinos for people. Ok, Miami… you know the path to my heart – food trucks and fresh coffee.

parking at the expo in Miami Art District

At the entrance they had these giant letters saying “MIAMI FAMOUS” with all the runners’ names written in alphabetical order over those giant letters. People were finding their names and getting pictures.

Inside the new expo building it was pretty busy. I heard they are doing construction on the convention center so this place was Plan B. It felt a bit cramped so we didn’t stay as long as last year. I still maintain that Miami Marathon gives the most swag at their expo than any other race! Seriously we didn’t even stay long or look around (we went from the bib line to the shirt line and out) and we still had bags filled with stuff, without even trying. 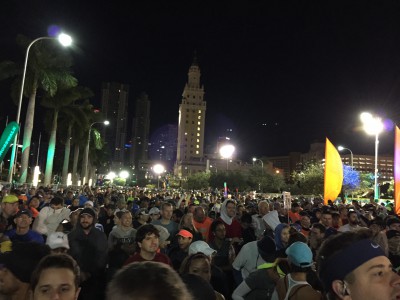 start line at Miami Marathon, everyone all bundled up

This year I didn’t go with my regular Miami Half Marathon race buddy because she couldn’t make it but I had some friends (originally from Miami) fly in to race/visit. I usually stay in a hotel downtown near the start line, sort of going for a cheap but close (and safe) location. Hey, I’m in grad school so I’m on a budget. But this year my friends were staying in a suite at The Mondrian South Beach.

Okaaaaay, The Mondrian is definitely the place to stay when you’re running the Miami Marathon! Not only is it the easiest drive ever to the start (just hop right onto MacArthur causeway and you’re there!) but it was also right across from Whole Foods and Starbucks. There are a million wonderful places to eat on South Beach/Miami Beach, of course, but it’s always really nice to be able to grab easy food and supplies really close by. But besides that, this hotel was amazing! The shower was in a glass cube where it rained down on you from a chandelier on the ceiling… a chandelier in the shower… raining on you!! The whole hotel was a work of art really. The pool would have been great after the race too, if it hadn’t been threatening to snow.

My friends graciously allowed me to crash with them in their suite the night before the race. We saw several other runners heading out for the race in the morning but this was not a big runner’s hotel per se. My other hotel I stayed in previous years was filled with marathon runners and businessmen and was ultra quiet at night before the race. The Mondrian… not so much. But the GOOD news is you don’t have to set your alarm for the race in the morning because everyone coming back from the clubs at 3am will definitely wake you up! Yay! Bonus!! 😉

We left the hotel later than I usually leave for race morning but with it being so freezing cold outside we didn’t want to wait outside in this 40 degree weather! The wind was so bad and kept up until maybe an hour after the start. It never warmed up either. We talked to a bunch of people afterwards, even a guy from New York, and everyone said they started out freezing and were still freezing the whole time they ran. My fingers were so cold that when I tried to eat my GU gel packet at mile 8, I couldn’t squeeze the gel out of the packet! I was trying to get as much as I could but my hands were unbending ice blocks and would not listen to me! I ended up giving up and throwing the rest away, which was a bummer because I hadn’t eaten breakfast and I really wanted more of a fuel boost.

The race itself went pretty good. They seemed to start a lot sooner than they did last year so we were halfway done when the sun had risen a bit in the sky. Last year the sun was completely up by the time we got to Ocean Avenue/South Beach. The course was new this year too and instead of going up across the northern bridges we looped back around to run MacArthur again. I didn’t mind it but my Miami friend was bummed. I think the reason for the change is, again, construction.

The water stops…. *sigh* let’s just say that it’s not Miami Marathon’s strong point. But I’m so used to it now that I don’t care anymore. It’s not awful or anything but there aren’t a lot of cups filled so runners are have to stop for a bit to find/get a cup. Not a big deal this year in the cold but 2 years ago when it was blazing hot, people were getting crazed at water stops and it was a problem. The finish line this year wasn’t as backed up and there was a much more obvious flow going on, which was great. They give you the usual post-race banana and bagel etc, but I skipped all of this to go find my rice and beans! Pollo Tropical sponsors this every year and every year it is my finish line goal!

best part of the race! rice and beans! (aka what I had for dinner every night as a kid)

The medal was great, as usual. I didn’t realize it until afterwards but I think there are different colors schemes within the half and the full, as in you have several choices for the half medal and several choices for the full. I saw some people with half marathon medals that were pink and blue later on Instagram, but mine was pink and green and yellow. It sounds weird but it still looks good. I was too cold and too done running to notice anything at the time like choosing medals. It’s my 3rd Miami Half Marathon medal and it’s the most times I’ve ever run a single race. 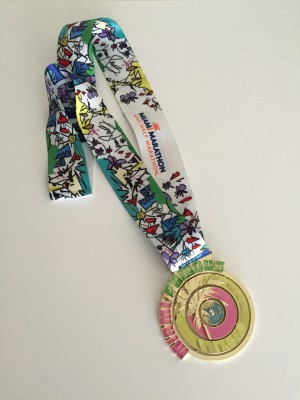 I told myself that this would be the last Miami Half I’ll ever run, and that’s probably true, because I want to do other halfs. But if I feel like running a marathon next year for some reason, I might run the Miami Marathon. It’s a good marathon for me in that it’s close to home and, more importantly, you can sign up right until the last minute! That is the best thing ever, in my opinion. I really hate having to commit 10 months ahead of time to BIG marathons in BIG cities with BIG price tags on them. I’m finishing up school this year and I never ever know how school will impact my marathon training. And after I got that injury before Marine Corps Marathon, it made me realize how any small thing in your training can result in lots of $$$ lost in race plans (plane tickets, race entry, hotels, etc). Or even if you still go, it’s no longer worth the money you spent on it because you won’t race well. It really appeals to me to just be able to assess my fitness and work/personal life the week before the marathon and make a decision right then.

It was a good race and we managed ok. We weren’t running it for time and my friend stopped for a few things like bathroom and shoelaces so I was able to get a few pictures at various points. I’m glad I didn’t have a time goal because in this cold weather I know I would have failed. But we enjoyed running together and catching up and we finished strong. I was feeling the Disney Marathon from 2 weeks ago at times during the race and it felt like an effort, but I’m happy with how everything went. We joked afterwards that most normal friends meet to chat over coffee or drinks but here we are meeting to chat over a race!

my hands were so swollen from the cold, they were like bear paws!

Definitely Run Miami! Stay at The Mondrian! And eat at The Front Porch for brunch after the race! It’s a great weekend run to do with friends and get a great medal!