This has been one of the more lively debates I’ve had with my race buddy/old military buddy – is an obsession with race medals a good or a bad thing? After the Marine Corps Marathon gave out medals for the first time this year for the 17.75k, it turned into this discussion.

I’ve done a lot of military sponsored races. I’ve run the Army 10 Miler, the Marine Corps Marathon, the 17.75k, and the Bataan Death March Memorial Marathon. Only one of those (MCM) gave out medals, and it was an awesome medal! But the fact is, I would have done it even if they only gave out high fives. The other races gave out coins, very nice coins, (except last year’s 17.75k that gave out this plastic poker chip looking coin that I think I tossed somewhere in my house). To be honest, I tossed/lost my 2001 Bataan coin too and only have the 2002 one because my husband found it. Anyway, my point is, I never used to do races for medals or coins or anything. I did military races primarily because I was in the military and I love and respect the military and I loved the experience of all those races and the camaraderie.

But here is where my friend comes in….

First of all, my friend races in a lot of non-profit, fundraising races. She’s sweet like that and always thinks outside herself. She’s also a fast runner who has probably won her age group or gotten to the podium multiple times before. I don’t know for sure because she’s not the type of person who would even mention it and I have to pry times out of her (whereas I would have worked it into a conversation with strangers at a gas station…. j/k probably not…). So she thinks my “obsession” with medals is weird and stupid and pointless (my words).

But I told her when I see my medals, they remind me of good times, good weekends with family or friends. It reminds me of sitting on concrete somewhere freezing my ass off, talking to people I only just met who have become friends in our joint suffering, nervousness, or excitement in the hours before a race. Medals remind of of the times I overcame significant hardships in recent years through running… instead of sitting on my couch with a cigarette, Doritos, and vodka (I would never have done that but my point is I could have done it instead of running!). It’s HARD being a runner sometimes. It’s hard because you’re busy with your life and your kids and job and spouse and sometimes you just want to be busy with a pity party and cupcakes. But, if you’re a runner, you get out there. Even my other run team partner who doesn’t have kids or a husband or grad school finds it legitimately difficult to get out for runs, but she does it anyway. Every person who runs is doing it at the expense of something else. It is often a choice, a hard choice and a sacrifice. And it’s one of those rare difficult things in life where you get a silly token on a string that you can wear or hang up and show people. It’s nice. It’s nice like cotton candy is nice. But you can’t keep cotton candy around for years. And, no, it’s not super important like winning a gold medal for your country. But not every wonderful nice thing has to have that level of importance.

So, yes, maybe I’m a race medal junkie. But I’m not apologetic. It makes me happy. And maybe one day my kids will have all these medals to remember all the things their mom did and that they went to and saw those years. As fancy as all the race medals are getting these years, and with races starting to offer medals where they previously didn’t offer them (*ahem* 17.75k), I can’t be the only person who thinks medals are awesome. But it’s great that people run for a variety of reasons and not just medals. I think there are a million reasons we all run and I have a circulating top 5 myself. But I guess the medal is just a fun frill, you know? I guess I just assumed a medal was at least in everyone else’s top 5 reasons too.

Let me know what you all think about medals! Does anyone use medals as running motivation? Has anyone commented on your quest for medals? 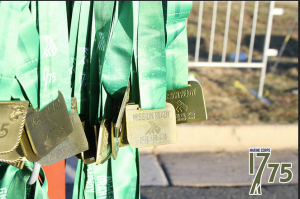 2 responses to “Is Being Obsessed With Race Medals A Bad Thing?”