I’m going to skip a big build up and tell you that the race went really well! I made close to a post-babies PR. This time was 2 minutes slower, but I am also only 2 weeks off of the Disney World Marathon here. I’m still 22 minutes slower than before kids, but whatever. I’m in grad school and have kids in diapers and am tired as shit most days so “fast post-baby time” is a good race day for me! 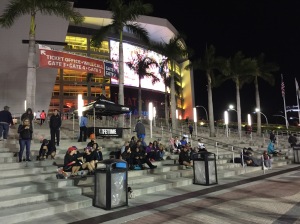 waiting for the start at American Airlines Arena – freezing!

Race morning started with a bang. I accidentally dumped a whole bottle of water in my lap as I tried to fill up my CamelBak. That was fantastic. Drenched from the waist down in water on a 52 degree race morning. Yay! I was only using my CamelBak because my sister-in-law/race buddy was worried we’d never meet up after the race and wanted me to run with my phone, and these new iPhones are so huge you can’t strap them to your arms anymore. Plus, the water stations at Miami Marathon are insane and I figured that taking the pack would at least spare me that. It turned out that they were as crazy as previous years and I was glad to bypass them, even though it was annoying to haul the ol’ CamelBak out for the half. I mean, it wasn’t bad. I’m so used to it by now. And I don’t know how we would have met up without it, considering they changed their whole finish line layout this year. More on that later… 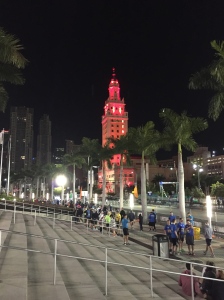 My race buddy was starting the race off with two blisters on her feet because of some walking and shopping we did a few days prior. She wore the wrong shoes and we ended up walking longer than expected. She taped herself up for race day but I was crazy worried about it, even though I didn’t tell her that at the time. I never know if I’m justifiably worried or just paranoid worried, so I never add that to someone else’s race day. I did tell her that aid stations would be able to help her with bio-freeze and other assistance… which turned out to be completely false because, from what I saw, there were no proper aid stations within the first 13 miles of the race. And let me tell you, I looked! The only thing I saw was a plastic bin at the end of a water station that had a bunch of bandaids in it. Terrible! Maybe I missed something but I’m telling you I was searching each and every mile for some sort of aid tent or medics or anything and I didn’t see a thing. Disney Marathon had practical M.A.S.H. units every couple of miles that looked like they could perform minor surgery if needed. Miami? Eh… slap a bandaid on that and todo bueno! I was sure my race buddy was cursing me.

Miami got really strict on corrals this year. That was new. They had people checking at the entrances. My buddy was in a corral a few letters back and didn’t want to stand alone. I said I would go back with her, which they allow you to do, but I really didn’t want to. It was FREEZING! They said 51 degrees was the record low for the race and that we were at 53 but that the weather would continue to drop until the start time. That is super cold to us down here in soflo and I could only think about how much longer we would have to wait before starting if we went to a further corral. Soooooo… maybe you see where I’m going with this but, I got her into my corral. Let it be known that she did not want to break the rules! And I wasn’t breaking the rules because I was in my assigned corral! But, ok, yes, we are total rule breakers, the pair of us. Did I mention it was subzero temperature (… to south Floridians)?? The nice man checking bibs was distracted talking to a runner with a question and we walked in. It wasn’t him, it was us! Your corral guards are A-ok Miami! 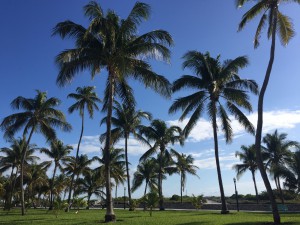 mile 5 of the miami marathon

We started as the sun was rising. It didn’t take us long to warm up, on account of the GIANT hill at the start. You basically go around the corner and up this enormous hill/overpass and then down to the bridge over to south beach. It wasn’t as eventful as last year because everyone was freezing. No fights broke out. The rest of the way was same as ever. It takes you about 5 miles to get to the area of south beach where all the great post-race restaurants are. Then you head back up to mainland and through various neighborhoods and bridges. The bridge with the teeth grating was there again and it’s always weird to run across it. And there are always locals who come out to cheer on runners throughout the way.

There were a few differences from this last year to this year. This year there were stickers/signs on the ground indicating that you were on the half marathon side vs the marathon side around the 12 mile marker where the two races diverged. Maybe they realized that some people are plugged in and weren’t paying attention to what they were shouting, like my race buddy last year. This time you definitely noticed the signs on the ground. Then, after you cross the finish and have to walk around to Bayfront Park for your medal. This is where it got annoying. You can get your medal easily enough (great medal btw) but then you slow to a stop because they put this tiny tent you have to pass through for pretzels and bananas and water right there. The problem was you had JUST crossed the finish so you don’t want to come to a dead stop immediately after. But with the backup from this tent, as soon as you finish the race you are stopped and you have nowhere to walk. You are caged in this area. It is NOT good for people who value their heart not stopping because they came to a standstill right after a distance race. It wasn’t like this last year, so someone thought this up and thought it would better. Wrong! 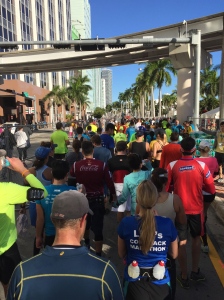 Then you have to exit the small area and you can’t get back in because it’s runner’s only. That’s fine since you just want to be free of this area anyway. They didn’t have a big tent like last year so my Plan B to “meet up under the huge tent” was a fail. Oh, and the runner tracking through Miami Marathon sponsored site? Another huge fail! Come on! Everyone who was tracking us said it didn’t work for them and we were tracking each other and it didn’t work. My husband found another app that let him follow us with a dot throughout the course and that’s the only way he could tell me when she came in and when I should expect her, thankfully. The good news was now I knew I had time to go get some rice and beans! This is the highlight of the Miami Marathon for me. They have these bowls of rice and beans afterwards for everyone. I grew up on this stuff so it’s great to me. But my sister-in-law did not grow up with this sort of food and thinks it’s crazy/weird. ha! Hey, 90% of the people running the race also grew up on this so I’m pretty sure everyone else considered this a highlight too.

After she got in and we met up (courtesy of her borrowing someone’s phone to call me) we made our way to the garage that was a couple blocks over. Traffic was fine afterwards getting out. We went back and quickly showered and changed and headed over to The Front Porch, as usual. It was packed by the time we got there so we had to wait a while. We had mimosas, which I usually don’t do afterwards. Those are probably the only alcoholic drink you can really take in after a race – just a splash of champagne and orange juice. After breakfast we were pretty tired (running on 2.5 hours sleep) so we went to Abuela’s for some cuban coffee. Good as always but sometimes too much of a good thing…. At 10pm I was regretting it because I was wired. (Definitely check out Abuela’s if you’re ever in the area though!)

Eventually we both got to sleep and agreed that we felt a lot better this race than last year, cold, wet, and tired because our training was sub par. This year my race buddy had a few good long runs under her belt and I had come off marathon training for two big races. I did feel like my body was tired and not as ready for a fast race yet, but I’m still really happy with my time 2 weeks after Disney Marathon! 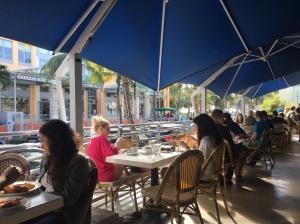 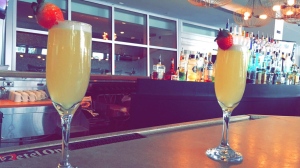 mimosas at The Front Porch 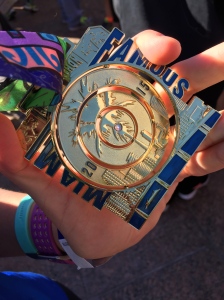 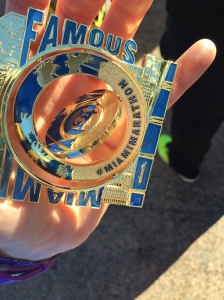 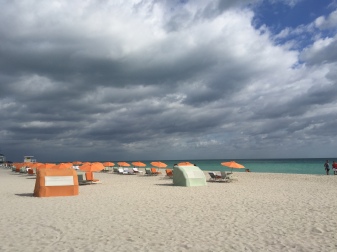